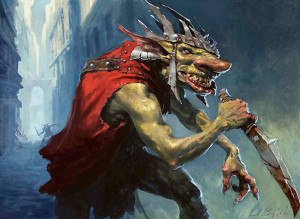 In a small velvet bag alongside my EDH deck boxes, there lies a scratched brass coin, about the size of a quarter, with a smooth and narrow edge that glints a bit when it flips through the air. At first glance it seems undeserving of such an exalted position, being none too flashy and not even a coin you could spend in a vending machine. But sometimes coins mean more than what they’re worth, and sometimes cards mean more than what they do.

This is my all-time favorite coin. A goblin coin. The almighty dollar of Krenko, Mob Boss.

On its heads side, Krenko’s face in profile. Fleshy bulb of a nose protruding to the right; reaching left, the oversized mockery of an elvish ear. A single piggy eye, thick sausage lips, canine teeth bared in a sneer. He’s the boss, he KNOWS he’s the boss, and his goblin mob had better recognize.

On its tails side… a butt.

Far less grandiose, even crude. Nothing fancy, just the outline of buttocks with gangly legs dangling down. This is because goblins are crude, and butts are funny. If you call heads on this coin and lose, it literally moons your ill-fortune. Plus, I’ve found that people love to call “butts” when I toss it. I mean, they LOVE it. There’s goblin impulse in all of us, apparently.

As you may already know, most coin-flip cards in Magic’s history are goblin-related, including the amazing “flip two and ignore one” legendary artifact called Krark’s Thumb. Lots of those cards found a home with Krenko. But that’s only about half of what makes this coin my favorite. For the other half, let’s take a look at some flavor text.

That’s right. Flavor text. We’re going full Vorthos on this one. This little gem comes right off of Krenko himself.

Avarice is greed for wealth. A lot of the time, that means a greed for coin.

The guy talking in this flavor text is an Azorius hussar, a blue-white knight/policeman in the ecumenopolis (city-world) that we all know and love: Ravnica.

Ravnica’s kind of like the New York of the Multiverse, the biggest city anyone has seen or can name, a skyline the size of a plane. If you can make it there, you can make it anywhere. You might knock Krenko’s methods, but it’s safe to say, he’s made it. That’s why other goblins rally around him; that’s why the police say he’s “highly dangerous.” And that’s why he’s rolling in the dough.

You know he’s rolling in the dough because his followers are motivated by money too. He finds the money he needs to pay his mob, gets ’em paid, attracts more 1/1 scrubs who wanna make it big in Ravnica just like he did. And the cycle continues.

He finds so many supporters that they double every turn. HE finds them. No littering matrons. No endless warrens to empty a la Time Spiral. This is a pyramid scheme, and our man Krenko sits atop its pinnacle, turning your average Foundry Street Denizen‘s daily routine into “Get Rich or Die Tryin’.” That “perverse charisma”? It takes a lot of legwork.

And who’s the guy telling us all about him? Some random court hussar.

I think that’s the part of all this I love the best. Krenko doesn’t feel the need to justify himself. Explaining things is the guilds’ job, and they’re not even very good at it. He’s a one-color Warrior in a two-color world. If anyone has a problem with that, he’ll whack ’em. Towering over other Goblins at 3/3, born into a world defined by guilds, Krenko’s individual personality looms larger than life.

Krenko’s flavor text might’ve been a story that Wizards told, but the coin shows an extrapolation I made. Magic is the game I love best, not just because it’s mechanically interesting (though it IS), but because of the stories any player can tell with it. Magic becomes the game that you – the player! – most want it to be.

My name is Emily, and this is the story I’ve told of a streetwise young tough named Krenko. I tell you this story so you can get a sense of me, of what kind of player I am. I’d love to hear your stories in return.

Tune in every Wednesday afternoon for The Other Side of the Coin, brimming with flavor text and narratives galore. There might even be some price specs and deck techs along the way. We’ll be diving right into the thick of things, with a snippet of flavor text so recognizable that R&D felt compelled to make a card out of it. Leave your guesses below!

Pricing information, opinions, and strategies are quite abundant these days in the Magic the Gathering Finance community.  However, one of the least talked about things is actually making a decision.  That decision could be anything from selling a collection, making a trade at a local gameshop, or speculating on cards like Tarmogoyf.  Personally, I believe the recent #goyfgate shenanigans were great for MTG as a whole.  It only led to a broader reach beyond the traditional MTG community, and personally I would have picked the card as well.   Again, the pick of the Tarmogoyf was a big decision that ultimately led to a huge reaction, and not all decisions create equal reactions.

I recently read an article by a player talking about how they were sick of the sky rocketing prices on MTG cards, and that it’s led to people picking value cards over actually playing the game.  I found this article to really resonate with me because this is something that has crossed my mind a few times.  I truly believe that this decision comes down to the individual’s opinion, but should be a well thought out one.  One of the reasons I say this is sometimes in the Finance community we overlook the value of magic outside of the money aspect.  One of the reasons I continue to hold onto my collection isn’t just a financial piece, it has to do with a broader connected community and set of memories I have developed.  I began playing when Mercadian Masques came out, and at that time I wasn’t even a teenager. Eventually this evolved to becoming more serious when the Mirrodin Block came out.  The game also transformed into a very meaningful social event for my friends and me.

The one thing I would like to caution when making this decision comes from a personal experience.  I got a Super Nintendo in the early 90’s, and I eventually sold it to Gamestop to get a Gameboy color.  To this day I constantly regret ever getting rid of it, because of all my memories of gaming with family and friends.  I truly believe that one really needs to take things like this into consideration when cleaning out your collection.  It shouldn’t just be about the money, you can always make more.  You may never be able to get your entire collection back.  I know I wouldn’t be able to.

Trading is really an art form.  Most of the times you hear about people complaining about sharks, or everyone trying to make a small margin on a trade to be the one coming out ahead.  In reality, this to me is mostly the problem when people are both informed about a value of the card.  In today’s world where a person whips out a smart phone and knows the prices right away is actually quite boring.  Otherwise the person isn’t just a shark they are just another d, or a dick.  The real thing about trading this way is correctly speculating on a card.  You are taking an opinionated view of the market and most likely will not capture the value today.  You should look at it as more of an investment in the game and financially.  How can you protect your assets with hedging?

The other thing about trading is the fact it’s really about sales.  How do you sell yourself or make others feel comfortable trading with you?  If you become the go to person for trades you are way more likely to find the value you are looking for.  Taking a short term hit on trades only to come out better in the long run helps a ton.  Especially if you believe yourself to be informed, and know that there are cards falling out of rotation or a meta-game that no longer favors a specific set of cards.  The even trade or taking less on a trade may actually put you ahead in the long run.  Back in January I traded my Master of the Waves, Sidisi Brood Tyrant, Wingmate Roc and Ajani Mentor of Heroes (Chinese) for a Spellskite and Sword of Feast and Famine.  I think looking back today even though I gave up a lot of value then I came out ahead today.  The cards I traded away lost value while the ones I received have only increased.

Like the trade in the last paragraph that was purely speculation.  However, being informed and participating in the MTG community a person can increase the odds in their favor. Sometimes not making the decision to trade, buy a box, or play in the local gameshops FNM in and of itself is the best decision to make.  If we look at this decision to not participate from a financial view, holding cash is sometimes the best thing to do!  Your cash is only going to depreciate against inflation, but most likely this will be a moot point because you will have already spent your money somewhere else.

A lot of the time when we make decisions we need to tune into our opportunity costs.  What is the real loss I am facing with my time or dollars by making one decision versus another?  Earlier this week I read another article talking about indexing.  How to properly acquire MTG cards to smooth out your risk and capture a spike in price.  This is one of the practices I employ.  I DO NOT chase cards, and neither should you.  One this is a terrible strategy, and you will most likely overpay.  Two a lot of the times it’s just luck.  Three you can’t always move 100 copies of something.  This week I was able to offload some cards outlined here on Pucatrade by employing this strategy.  Below is the acquired costs including shipping per copy, and then what I made in terms of pucapoints.

Pucatrade is definitely a nice source to move your product, however again I don’t think moving 100 copies of something unless it’s a staple.  Typically when I employ this strategy of diversifying, I get at least 8 cards.  One set for myself as a collector, and then another set to trade out.  It’s important to have a diverse collection for other players when showcasing what’s available for trade.

There are many aspects in MTG that employ strategic decision making like selling a collection, trading, and speculating.  Along with those and the many others that are out there the idea is to be conscious of the decisions you make because they do have a financial impact, opportunity cost, and drive many of the memories that got us into Magic in the first place.