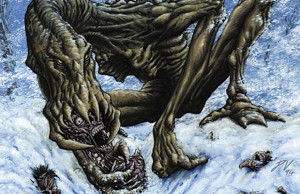 Whether you chuckle, roll your eyes, or nervously scan your cubicle for Goyfs, the above flavor text (often shortened to “Ach! Hans, run!”) is among the most memorable, most emotional, and even the most ridiculous flavor text snippets of all time.

Even if you haven’t been playing Magic for very long, you’re probably well-acquainted with at least one “Creature – Lhurgoyf.” Whether you rue the day Tarmogoyf saw print, or you thank the MtG gods that your Zoo deck can hit so hard on turn 3… I guarantee that Lhurgoyf is ultimately responsible.

Lhurgoyf was a four-mana creature, weighing in at 2GG. Its power was the number of creatures in graveyards, and its toughness was that number plus one. A complex mechanic. Yet oh, so grokkable.

Fifth Edition saw a lot of other lasting card designs- pain lands, Ball Lightning, Force Spike, and the second-generation “Elemental Blast” cards, to name a few – but Lhurgoyf has stood the test of time in its way too. “Lhurgoyf” became a recognized creature type, and the original card spawned a five-color Lhurgoyf cycle, two other creature cards completely from flavor text, and most of the essential elements of Tarmogoyf. (The low low price of 1G was a last-minute edit; it cost 2G for most of its life in testing. Other than that, it’s a straight-up extrapolation from Goyfs back in the day.)

Sure, Lhurgoyf wasn’t exactly a competitive card at the time *cough cough Necropotence*. And it didn’t become a competitive card, ever. But Lhurgoyf was such an R&D home run for Wizards that I’m going to declare it the single most influential card in the set. That’s a bold move, I know. But stick with me.

Lhurgoyf was never really intended to be a long-lived creature type. In fact, when it was first printed it was a Summon card, “Summon Lhurgoyf.” This came from an era when we still had oddities like “Summon People-of-the-Woods” and “Summon Nameless Race.” But players loved this card! They loved it for all the reasons we still love it today. The “growing with the graveyard” mechanic. That crazy art with the rangy limbs and gnashing teeth (thank Pete Venters for worldbuilding through his art in those days). And of course, the text!

In 7th Edition… a curiosity! A creature called Revenant came out, a black Spirit with flying. It had Lhurgoyf’s creature mechanic, but only for your own graveyard, and without the +1 to toughness. Seems a little underpowered, even for creatures back then. But then there’s the flavor text.

A dark little joke? An implied story, that Saffi had perished while Hans survived? Or just an acknowledgment that Lhurgoyf had been so well-received? Knowing WotC, the answer is “all of the above.”

Lhurgoyf’s next aftershock of influence came in Odyssey, with the five-color cycle of Goyfs. Each keyed onto a card type its color liked. In WUBRG order, that was enchantments, instants, creatures, sorceries, and lands. They also had a keyword ability primary for their color (vigilance, flying, regenerate, haste, and trample). Magnavore saw a 9th Edition reprint, and Mortivore is perennially popular with kitchen-table players. He tends to get the biggest of them all, and regen is just good.

It’s doubtful that too many of you remember Cantivore, Cognivore, Mortivore, Magnavore and Terravore. Maybe if you play Commander, you’ve seen Mortivore lurking around mill decks from time to time. But these guys were all the next generation of Goyfs, and they all sport a variation of the classic Goyf physique, with hallmark gangly limbs and enormous teeth.

The Lhurgoyf saga continues, and likely concludes, with Time Spiral block. At last Wizards decided to give us the lady whose cry of alarm inspired it all: Saffi Eriksdotter.

“In the blink of an eye, she strode from deep snow to dusty waste. From the crease of light behind her, a voice rang hollow: ‘Saffi, wait for me…'” 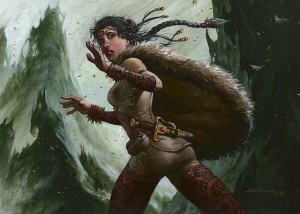 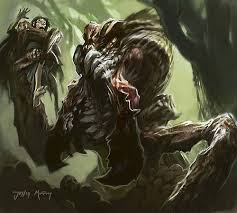 A time rift. Our Saffi went through a time rift. Perhaps she’s survived after all. Yet her card’s mechanical design seems to signal a thumbs-down for that hypothesis. You can sacrifice her to make sure that a creature that would be destroyed, returns to play. Maybe that means she gave up her life for her brother. Maybe it’s intended to show the chaotic nature of time rifts themselves. Or maybe she was meant to be played WITH Tarmogoyf.

Look at their art side by side. Their original art, in Goyf’s case. On the left, Saffi flees, glancing backward in terror. On the right, Goyf holds a familiar-looking human in one gnarled claw. It could be Saffi’s alternate past, or her inevitable future. It could be Hans. In a typical GW Zoo sort of build, you’d probably see yourself saccing Saffi to save Goyf pretty regularly. The overall picture looks grim from where I’m sitting.

So this is the pinnacle of Goyf. We’ve gone from one type of card in the ‘yard, to EVERY type of card. We’ve gone from a flavor snippet of text on a random one-off creature brewed up for fun, to visible art references between two viable, competitive cards. It paints a fitting, though terrifying picture. A serviceable end. But in my heart of hearts, I wonder… who is Hans Eriksson? And when will he get his revenge?

On the spec side of things, green and white look strong in Origins, and Goyf is still somewhat down. See if you can build a Saffi recursion engine into your little-kid aggro Wilted Abzan. There’s never been a better time.