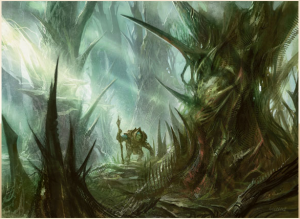 Today, The Other Side of the Coin takes a vow of Asceticism, and offers a few simple words regarding one of its author’s favorite green cards of all time.

Five-mana enchantment. Scars of Mirrodin. Creatures you control have hexproof. 1G: Regenerate target creature. Every creature on your side of the field becomes Thrun, the Last Troll.

And there he stands on the art.

Tiny, far off in the distance, looking up and away from the viewer. He can see the area that would be inhabited by the viewer; look at him. He sees you.

He is ignoring you.

He refuses all company, attentive only to his surroundings. He is wounded. He is burdened.

“Let my ignominy build walls thicker than iron and stronger than darksteel.”

Thrun saw what happened to Glissa when the green sun was born. He saw her confrontation with Memnarch, who caused all other trolls on Mirrodin to vanish, back to the planes from which they came. He understood the meaning of Phyrexian oil.

He understood, and he told no one.

“His crime was silence, and now he suffers it eternally.”