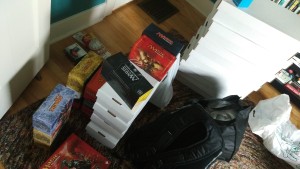 Value of a Collection

I’ve been actively participating in the Magic the Gathering finance community for some time.  There are multiple ways that individuals value their trades or collections for that matter.  One of the key things to think about when getting rid of a collection is what the counter party uses for a value system.  Most likely they will not have the same mindset as you.  For example, I have yet to meet someone who buys large collections at TCG mid.  It just does not happen, and maybe it is just a Minnesota thing or I am not using all avenues available to me.  So keeping the above in mind I will continue to talk about an experience I had last week with a buyer named Gleb.

The way I value my collection is at TCG Mid, for rares and mythics.  I also believe it can be a little inflated, and to keep a complete up to date list is a huge pain.  I literally have an excel spreadsheet with every card that’s rare or better that I have collected.  This spreadsheet does not include rares from older formats like stronghold, even though I have those cards.  It also does not contain other cards of value like any foils aside again from rares and mythics.  Lastly, it does not contain non bulk commons that are valuable like Spell Pierce.

Keeping everything in mind my collection contains roughly 900+ unique cards, and roughly 3,000 rares and mythics.  The average worth of those cards, not weighted mind you is roughly $2, and that average doesn’t include the foil pricing.  Again, this is all TCG Mid.

Here was/is the ad I placed on craigslist. 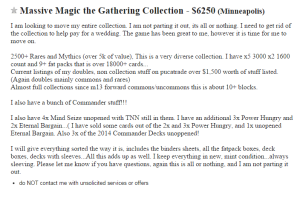 I wanted to start at $6250 to only attract the correct buyers.  The other reason, why I even considered selling my collection, granted I DO NOT plan to stop playing, is to help pay for my upcoming wedding.

Actively selling and trading a lot over the years, I look at moving this collection as two fold.  One I would like to maximize what I can get, and two I know I will have to take a discount.  The counterparty needs to have a perceived value on their end to be enticed to buy the collection.  Again, I wanted to attract the correct types of buyers.

With that said I think I learned a very valuable lesson trying to move my collection.  DO NOT ever contact people that have “I buy your collections of MTG cards” or “I pay the most for MTG cards” unless you need to fire sale. I spent about two weeks talking to several buyers trying to work stuff out.

It is an extremely painful process to be honest.  You already know someone is going to try and nickel and dime you on everything.  They want to feel better about their purchase, I get it…again I said I planned on selling at somewhat of a discount.  .

One of the buyers I contacted lived quite a ways away and looked very promising at first.  I buy and sell cards all the time on ebay so I am pretty versed with the pricing and discounts there.  I begin talking to this guy who’s a few hours outside of the twin cities that says he buys at Ebay pricing.  Cool, I get it and he is transparent on how he values collections.  Knowing that he’s at a decent discount to TCG Mid, I figure okay take about 25% off the top.  I can deal with that, because I think 20% is fair if the person isn’t going to go and turn around selling everything right away.  He did tell me that he was a collector.  Granted I really don’t believe anyone on craigslist.

I continue to talk with him.  He then asks for some of my top worth cards.  I shoot him a few fetchlands and Angus Mackenzie.  I want to see where he comes in.  He tells me he takes a two week average of pricing, shoots me a fetchland that is tcg mid $15, and tells me its $8 on Ebay.

Okay, hold on a minute.  I sell fetchs on Ebay, and definitely sell them for more.  If you didn’t know this about Ebay you can actually view recently sold cards.  To do this you search your card, example wooded foothills.  Then on the left column you scroll down and click the show only completed listings. 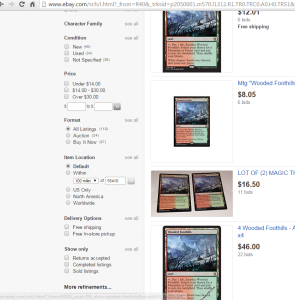 At the time of writing this you can see several wooded foothills sell above $8. 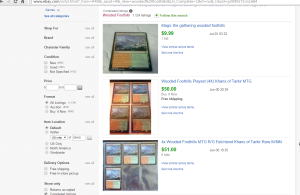 I quickly responded with a buy it now that had sold for $15 on a wooded foothill. I said that his pricing wasn’t fair, and that I definitely understood his pricing metric.  However, the problem was he left way too much leeway in it to make the pricing more of an opinion.

Last helpful hint is that there is a website that helps calculate an average price on Ebay.  I find it extremely useful, and hope that you can as well.

On to the next buyer!

Recently Travis Allan @Wizardbumpin wrote an article for MTGprice on etiquette.  I was extremely satisfied that other members of the community find this to be extremely pertinent to playing MTG as well as conducting sales and trades.  I also want to reemphasize that this is very important, and that you should always try and not be a “Gleb”.

In walks Gleb, and in reality it started off as a very promising email string.  Gleb another local buyer to the Twin Cities, I had contacted through craigslist.  He asked me what warranted such a high price tag, and I presumably said to keep the real players interested and weed out the nonsense.  He asked for my rares/mythics and I sent him my entire sheet.  This guy was definitely interested in the collection, and wanted to know when we could meet.

First, off I have a rather large collection as stated, and I was selling everything.  I did not want to parse stuff out because I find that you can make better margins when getting rid of your own collection.  From a buyers perspective you typically don’t take everything because it means more work, but it depends on the person.  Anyway I tell Gleb that he can come over to my humble adobe to check the cards out.  He refused and offered a local Starbucks.  I agreed understanding that maybe I am some creep from his perspective, and a public area is usually the best.  My concern again was the size of my collection.

I had asked what I need to bring to get to an offer for everything.  He replied with everything I bring.  Okay, so I was excited the night before meeting this guy, thinking this is going to go great and that I will get a little extra cash for my wedding.  It took me roughly over an hour to pack my little car full of magic cards.  However, I knew it was worth it because I know soon these will all be Glebs.  Man was I ever wrong.

As I got to Starbucks he texted me saying he was already there.  Cool, I wasn’t going to bring all the cards in so I just walked in proceeding to look for him.  I figured he would be standing near the line or door waiting to introduce himself.  Wrong again.  He was sitting rather very calm and collected sipping on a frappe in the middle of starbucks with a backpack and his laptop unfolded.  Great…he didn’t even wait for me or offer if I wanted to get something.   I actually became very uncomfortable around Gleb, and this isn’t something typical of an extrovert who does consulting.  He had a very weird vibe.

Anyway I told Gleb that my collection was outside in my car, and that I would rather not bring everything in.  I have everything extremely organized and laid out very efficiently, and figured this could go smooth at least.  As I begin to walk outside calm collected Gleb with his frappe follows me out.  I proceed to unlock my car, open all the doors, and the trunk to showcase the MTG goods.  This is where I really start to get annoyed about his etiquette.

Now, the horror ensues, as he drops all the foils on the pavement like a klutz. Then proceeds to say that he hadn’t seen any rares.  I quickly respond with they are in my backpack up front, and that I was trying to explain the collection to him before he started tearing through everything.  He quickly tells me to grab the backpack and head in to price the collection.

Dear god sir, I sent you the list! You had all week to price it out, I had no patience to wait around two hours to get nickeled and dimed especially after not offering me a Frappe! However, the best part was the proceeding statement he makes while walking to the door.  “For the record for six thousand cash there better be twenty thousand dollars’ worth of value.”  I go, ah what.  This completely blindsided me based off our proceeding weeks email discussion, and text messaging.  Why in god’s name would this tool waste my time like that?  He’s telling me that he pays 25% value.  There is no way I am going to waste my time with this shark. It would have been much better if he had been wearing the “Left Shark” costume from the Super bowl because that would of probably made for a better story.

I never made it back in to Starbucks to get my Frappe.  I immediately told Gleb that I do not think things will work out, shook his hand, made sure he didn’t jack any of my foils he dropped on the ground, and closed up shop.  I was fuming the whole way home for wasting time with this guy.  However, I figured it would at least make for a good blog, as I was trying to find the good in what went down.

Moral of the story, DO NOT work with idiot buy listers on craigslist, they are sharks.  Also, anyone in Minnesota, beware of Gleb, and for everyone else, please don’t be a “Gleb” and use proper etiquette.