One night last week, while I was listing great flavor cards as candidates for the column, it occurred to me. Legendary creatures had the bulk of my attention, and made up the bulk of my list. I crave more balance in our journeys through flavor, here on The Other Side of the Coin.

Still, it didn’t surprise me. Legends, by definition, are subjects of age-old stories brought to life.

“Legend,” from the Latin “leger,” meaning “to read.” Related words include “ledger,” a book of records; “legitimate,” verifiable through recorded fact; “legible,” possible to read; “legal,” permissible by written law.

And “legacy.” Because if you want something to last forever, you tell its story.

Still my inner Vorthos was troubled. What kind of stories could I find for creatures that existed in multiples? Or noncreature spells? Legends, while well-loved, aren’t inherently superior to other flavorful cards. And what does it mean for the flavor quotation when its speaker is not well-known?

As it turns out, that means the flavor is hidden. Making the effort to dig it up can be worthwhile and satisfying. So this week, break out your quest counters and prepare to face The Roil. We’re going on a Khalni Heart Expedition! 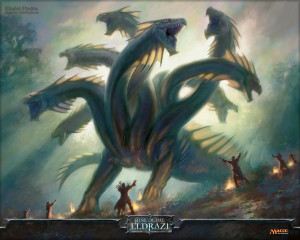 Green creatures don’t get much greener than Khalni Hydra. If you have a ramp engine and some green tokens, you can power out this 8/8 trampling monstrosity as early as turn 3. Entire deck archetypes have been devoted to summoning this thing. And aren’t the green gods of Theros pleased to see such a strapping gentleman?!

Basically, the Hydra is a powerhouse, an octuple-green trampling monster with a strangely powerful mana mechanic. And for many of us, that’s enough to make him special on its own.

At last, the words I’ve wanted to type for days now. Let’s check out this flavor text.

“In ages past, bargains were struck and promises were made. Now we must collect on our debt. Begin the hymns.” – Moruul, Khalni druid

Okay, WHAT?! Time to collect on a debt? Begin the hymns?! What kind of hymns? Who’s singing them? And what kind of crazy Summoner’s Pact did these people make?

I’m not sure I’d ever read the flavor text of Khalni Hydra before this week. It’s Khalni Hydra. You don’t play it for flavor. But this story feels totally crazy, even ominous. It spans entire eons. Basically it allows us to peer into the history of Zendikar a little more deeply. Let’s start with where we are on the plane, and what that means.

This story is set on the volcanic Zendikari content of Akoum. Yup, the one from Akoum Refuge. Volcanic waste as far as the eye can see. Not really what I’d expected from the greenest creature ever.

But it turns out that some of Akoum is verdant and lush, thanks to the chaotic behavior of mana on Zendikar, called The Roil. The Roil often sparks unchecked supernatural growth here. These flashes of growth, called “Life Blooms,” usually last a couple of years and then peter out. With one notable exception.

Ora Ondar, “The Impossible Garden,” has lasted a century and shows no signs of shrinking. The people of Ora Ondar (mostly elves) have dedicated their lives to preserving its verdant beauty. I’m sure they do a lovely job and all, but they’re not the main reason this garden exists.

Unbeknownst to the denizens of Akoum, this font of green mana is fed by the Khalni Stone.

Aha! Now the name makes sense! Although honestly, the people who have summoned Khalni Hydra are unlikely to call it that themselves. We as players have been let in on a sort of dramatic irony. We know that an ancient artifact of enormous power stabilizes the Life Bloom here, but they don’t. They worship the land, even eating some of its rare mana-infused fruits religiously.

The druids eating these fruits, are the ones beginning “the hymns.”

As for the bargains being struck and promises made, it’s important to note that this is not a card from the Zendikar set. It’s from Rise of the Eldrazi.

Mechanically, this makes sense. It takes a ramp deck to cast most Eldrazi. But a ramp deck with the Khalni Hydra strategy can focus on spamming creatures early, and then get their mana back when the hydra hits play. That strategy might seem slow and stompy, but it still undercuts the Eldrazi player. More so if you’re dedicated, just like the people of Ora Ondar.

I love Magic. It tells so many great stories. And making the effort to uncover hidden stories can prove most rewarding of all.

I still feel frustrated by some aspects of this card’s flavor. Mostly the deal-making part. But in my search, I’ve found rare fonts of mana, volcanic peaks, and some very devoted humanoids (just to name a few things). It’s been worth it. That’s what I’ll come away knowing.

Spec note: People seem to be leery about this card getting reprinted in fall. It’s down from $20 to around $13. But honestly, it’s been around a $20 card for the past year and a half. I don’t anticipate Khalni Hydra‘s price dipping much lower, even in the event of a reprint. He’s what you call “eternally playable.” As long as there are cheap green ramp dudes and Plant tokens (shout-out to Khalni Garden!), there will be a place for Khalni Hydra.

Thanks for questing with me, you guys. I’ll talk to ya next time.