Hi internet! This is Emily; you may know me from my new weekly segment, “The Other Side of the Coin.” We really need a tag for that. Anyway, I have exciting news! See the title above! Wheeeee!

As you all probably know, Origins came out this weekend and a lot of the cards look totally sweet! I was a fan of white from the second I saw Kytheon’s Irregulars, bears with upside at common, and the return of Celestial Flare. The renown mechanic is awesome, and tapping the board down while crunching in for a bunch just looked like every Sealed player’s dream. So I picked Team Gideon and came to smash.

And that worked out really great. I mean, really, REALLY great. I don’t want to discredit my skills at all; certainly a less experienced player would not have built the deck correctly, or played it with the opponent’s plan in mind. Still, it must be said that sometimes you get lucky and hit the deep end of your Sealed pool. This Sealed pool had one of those nine-foot deep ends, the kind you can dive headfirst into without getting hurt. The god draw. So, into the depths I dove.

The seeded pack (which I always sort of hate for existing, but that’s another post’s topic) had Suppression Bonds, Stalwart Aven, Knight of the Pilgrim’s Road and an Enshrouding Mist as some great playables. The promo rare? Hixus, Prison Warden! He’s a creature with flash, he gets rid of problem creatures, and I already had a way to protect him from damage. Neat!

Cracking into my next few packs, I quickly realized how ridiculous this deck was going to be. Topan Freeblade and another Knight of the Pilgrim’s Road at common. A War Oracle at uncommon. Rares looked… a lot whiter than normal. Knight of the White Orchid. Relic Seeker. ANOTHER Hixus. (“Yikes, I have two of a legendary creature.” What an awesome problem for Sealed!) 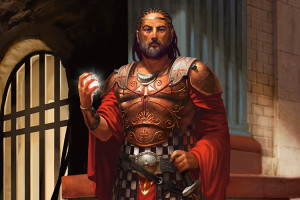 Molten Vortex and Soulblade Djinn were off-color, but the Djinn made blue look extra-nice for a second color. Finally, those fantastic Irregulars showed up, really cementing that heavy commitment to white. The other color would not be a support so much as a splash to fill out the curve where it needed filler.

Ultimately it came down to bears and removal. When I looked at the spread of white cards, I decided that any single splashable kill spell would clear the bar on that front. As for the other…

The case for bears is pretty simple. When you wanna be the beatdown in Sealed, it must be said that you need decent two-drops, and anyone who tells you otherwise either doesn’t play aggro very often, or is lying. You need at least four, up to six, and if they’re more than just a 2/2 for 2, you’ll really be happy. Unfortunately, there aren’t that many Grixis bears in Origins; they’re mostly white or green.

So that was goodbye to blue spells, including Soulblade Djinn and his small team of 4-drop flyers. They might have worked, but green was probably better.

Black had enchantment removal and a gold card, but no other creatures to contribute for me. Red had a ton of serviceable 3-drops, also with a gold card, but for best creatures on-curve, always remember that a 3-drop is not a bear.

So what did I have for green?

Two excellent bears in Undercity Troll and Elvish Visionary. When your “worst” bear is a 1/1 that draws a card, your Sealed deck must be in nice shape. Five really good bears. Awesome.

A Wild Instincts got added to the small contingent of noncreatures, for its solid use as removal. Good enough.

For every other unfilled spot in the curve, there was a playable creature. Perfection.

So… yeah. This crushed.

The first two rounds flashed by, two 2-0 rounds. My opponents never seemed to draw into anything that contributed to their board, or cleared mine. The biggest inconveniences were a Yoked Ox holding a Mantle of Webs (yes, really) and a turn-two Harbinger of the Tides… when I had no creatures to bounce (again, yes, REALLY). Nice guys, probably less lucky in their pulls, but their plays telegraphed inexperience with the format. No big challenges in the first half.

Round Three got more interesting when I kept a 7-card hand with green dudes and no Forests… consequently getting mauled. The opponent was on blue-green tempo – lots of annoying spells for bounce and value. For the record, Anchor to the AEther is GROSS. And in future I will draft as many of them as I can find, because the tempo swing is hilarious. I mean, the guy had good stuff going on.

Game Two of that round saw me holding yet another sketchy hand AND on the play. The mulligan to six was correct, and a beautiful mana curve emerged. Hixus flashed in to the rescue against a Skaab Goliath, and that was that.

I noticed that my opponent, while more experienced than the last two, exhausted all of his bounce spells too early, and didn’t realize that waiting to bounce Hixus (or at least a giant Renowned guy) could spell disaster for me. He feared for his life total too much. I know how to exploit that fear.

In Game 3, he bounced all my bears and I basically pretended to be annoyed until my board came back. CRUNCH. Win.

It turns out that Renown plays a lot like Bloodthirst from old-school Ravnica. Putting that deck on the back foot is the only real way to win. A tempo deck CAN do that, but it needs to get really hurt before attempting to stabilize. Despite the Game 1 mulligan terrors, I held on.

Round Four – King of the Hill table! And a guy whose birthday it was… man, I don’t wanna beat a guy on his birthday, you know? That feels bad. But I wasn’t giving up so easily.

Game One, I lost again. Very frightening. It got a little ridiculous when a Claustrophobia hit Kytheon’s Irregulars… and the Irregulars could still tap down the board. But Birthday Boy had a blue-white flying army, and played creature after creature until enough of them pecked through. 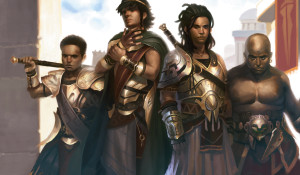 At this point I ought to have sideboarded, and forgot. I also mulliganed to six, but had the right land.

Game Two thankfully saw no enchantment removal, but could have been a terrible blowout otherwise. Skysnare Spider got Turn to Frog‘d and eaten up by a 4/4 Ringwarden Owl. Mighty Leap couldn’t save it; a second copy of Mist would’ve been okay. Another close game, but my renown guys just won the race.

Sideboard time! In with the Caterpillar! Out with Orchard Spirit! In with a second Enshrouding Mist! Out with Mighty Leap!

Game Three saw me with an okay starter, on the draw, but it turned out that I got stuck on two land for a turn. I didn’t mind accepting some extra damage to add to the board, though, because this was a race I could win!

Topan Freeblade‘s vigilance and Undercity Troll‘s regen, two abilities that are fantastic when you’re behind, bought me time. The Freeblade got hold of Throwing Knife (SUCH FLAVOR!) and that was enough to bring it on home.

– I built a deck that mulliganed well, once I knew what to mulligan for. Rounds Three and Four both forced me to do that, and the staying power of the deck paid off in a big way.

– There was enough removal, different types of removal, and ways to find it (Relic Seeker and Hartebeest in sideboard for matchups favoring Suppression Bonds). For a creature deck, the sheer amount of answers was staggering.

– I paid attention to when the opponents were tapped out, when they had mana, and what they might have. Mostly.

-Never forget to sideboard between matches. Even if all you do is LOOK at the sideboard and pretend to switch stuff.

-Keep focused. Even when you’ve got a 6/6 with vigilance and reach, an attacker that would normally get eaten should make you very suspicious.

-Be a good sport and don’t worry too much if your opponent isn’t. There were a couple of moments where my plays were questioned. It kind of happens a lot when you’re a female player. “You used a kill spell on THAT?!” Yes, I did. And now your life total is zero. Deal with it.

-Apologize for any excessive snark or salt. Losing Skysnare Spider made me annoyed, and so did some bad blocks in that final game. But I said, “sorry. Good plays on your part. I need to just eat that.” And I did.

Here’s to the prerelease! I hope everyone attended one, had some fun, maybe won some packs, and loves the new set! 🙂

See you on The Other Side of the Coin!