For the next installment of our Battle for Zendikar: Limited Archetypes series I’m going to talk about token strategies.  Everyone is perfectly aware that there are Eldrazi Scion in the set, and there are also a couple other interesting token-themed cards in the set.  It’s actually difficult to put a specific color to this archetype, but you can expect it to include some combination of Green, Black, and White.  I actually foresee in many cases have a white or black splash.  It’s worth noting at the front that the order I’m posting these isn’t in an order of power level.

The main reason tokens is the next archetype is that often times in draft you see a couple early picks and you start leaning in a direction.  I consider this a fallback option for when Ramp or Converge isn’t coming together but you have some of the pieces.  This is both a viable archetype on its own and is what many aspiring ramp/converge decks will end up switching to late in pack one or early pack 2.

This is likely the core of the deck because it provides help in the splashing department and has the largest array of token generators.  Importantly for Green it also has a couple reliable ways to pump your team and start converting the tokens into pressure.  Cards like Tajuru Beastmaster and Tajuru Warcaller are the primary ways to do so.

Black has a sacrifice theme and that will play heavily into the tokens deck that features Black as a core color.  While it lacks premium token generation, the sacrifice outlets provide tempo positive ways to clear out problematic creatures and start pecking away. Bone Splinters being the premiere option here.

White has both some pump and ways to generate tokens.  However, if white is one of the core colors in your tokens deck you’re likely to also be more of a curve out Allies deck with the ability to make tokens.  Rather than strictly a tokens deck, but if you’re splashing for white you’ve found yourself with cards like Retreat to Emeria and Unified Front.  Unified Front being one of the reasons to splash here.  Normally splashing for a sorcery speed make three 1/1s isn’t exciting but here Retreat and Unified front provide multiple things.  Retreat works as a pump spell and both cards produce Allies, which can get additional triggers off of both your keyword Rally cards and the Rally pump creatures in Green.

Blue gets an honorable mention as a possible player in this archetype strictly because of Ruination Guide.  I think that’s a key card that could signal a GU player to start considering tokens more highly.  Turning all of your Eldrazi Scion into 2/1s is a big game as they start trading with real cards.

Despite being slightly redundant the core cards here are mostly in green and are the big time token generators.  Eyeless Watcher, Call the Scions, and Brood Monitor are all key players that put multiple bodies on the table all along the curve.  Brood Monitor seems slow for a tokens deck but the reality is that this tokens archetype is likely to play like a mid-range deck.  If you’re in white early Retreat to Emeria is a huge player here as well.  It also combos really well with Fertile Thicket which can help you get to Brood Monitor and set you up for a huge pump from Retreat or just a new set of tokens.  If you find yourself in black it’s important that you find the removal early.  Bone Splinters, as mentioned, is great here and Swamp Surge is a late pick-up that works as a win condition is you’re light on creature pump.

If I were drafting this I would be looking for the Rally pump cards as late pickups as well as Unified Front, Bone Splinters, and cards that are just weak in every other deck like Inspired Charge and Cliffside Lookout, both pump spells that no other deck wants.  The key difference in signal cards between this and ramp is that you can pick up impactful cards late in packs.  Retreat to Emeria is an interesting one because I think it is likely to float to the middle of many packs, but I could be underestimating how much a non-tokens deck wants that card.

I don’t think there’s a single first pick that makes me really want to be the tokens drafter, but this is a fine option when you start to see that the archetype is open.  Keep your eyes peeled for the signal cards in the back half of packs and prioritize token generators, especially the Eldrazi Scion versions so that you always have an out to move back into ramp.  I think this deck will manifest with a few different color combinations and that will be one of it’s strengths. In my opinion, BFZ doesn’t boast one clear cut tokens strategy but has the card quality and depth to let drafters build their own tokens deck.  This may not be the strongest archetype in the format, but it’s one you’re likely to play against and may end up drafting a time or two.

Thanks for reading, if you have any questions, comments, or a specific archetype request let me know in the comments. 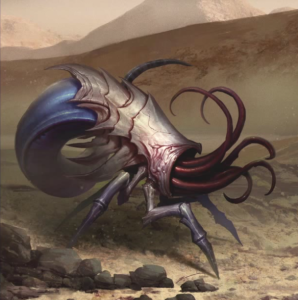 Battle for Zendikar was just fully spoiled this past week, and this set has a few clear cut archetypes.  It’s hard to get an accurate read on how strong each will be right away, but at the very least we can be aware of what archetypes are really looking for what cards and what cards should signal that an archetype is open.

I’m starting with Green Ramp because with the Prerelease events this weekend Sealed is going to be on every one’s mind and ramp lends itself very well to most sealed formats and should be a strong option this weekend.

I expect Blue to be the natural pair for Ramp decks because it also has a couple excellent Eldrazi Scion generators with Eldrazi Skyspawner and Incubator Drone to help ramp and stabilize the board.  Another all star for a G/U ramp strategy is Murk Strider, it isn’t the easiest to enable this card in G/U but if you can this is an example of just one great tempo spell this color combination can use to buy time to get their large threats online.

The great thing about Red as a ramp pair is having access to the many great removal options Red brings to bear in the new format.  Cards like Stonefury and Rolling Thunder are great versatile answers that scale great with the additional mana Ramp is going to generate.  There are other great cheap removal options in Red.  The one drawback to this color combination is a lack of quality cheap threats to stabilize the ground game, many of these threats are aggressively costed and are much better when turned sideways then they are when left back as blockers.  For this reason R/G can find itself with many of the creatures that get pumped with Landfall triggers and perform as a midrange beatdown deck.

Similarly to Red, Black has solid removal.  It lacks the versatile answers that red provides but has a couple unconditional removal spells that have the upside of exiling the creatures they kill to enable cards like Void Attendant that both stabilize the ground and help ramp up.  Black also has a strong tokens sub-theme that can be exploited for additional win conditions.  Catacomb Sifter is a perfect example of a card in this color combination that helps ramp and provides fantastic card selection when sacrificing Scion to ramp.

This is likely the worst color pair for a pure ramp strategy just because white is more aggressively slanted.  However, White does bring some solid removal to bear and ways to pump Eldrazi Scion and capitalize on going wide.  There are also great Awaken options like Sheer Drop in white that are great mana sinks for a ramp deck that hasn’t found its big threats.

Green provides great fixing in the format and in Sealed you can expect to splash a third color very often.  Blue is the best color pair and a decent splash color, although Red/Black provide the splashable removal these decks will be looking for.  I would be looking for ideally a GU shell splashing either Red or Black for some versatile answers to ensure the deck can consistently reach the late game.

The highest priority commons are those that generate Eldrazi Scion.   Eyeless Watcher and Call the Scions ramp and provide multiple bodies for pay offs in splash colors.  Cards like Outnumber and Swamp Surge provide ways to utilize Eldrazi Scion if you lack large win conditions.  These cards also ramp you up two mana the following turn, Natural Connection and Lifespring Druid are just barely behind and are the two remaining core cards.  In draft these four are fairly interchangeable and a good mix of the four is ideal. Brood Monitor is the final core card, this can be ramped into and helps get into the 7 to 9 drop range reliably.

As stated earlier, ways to utilize tokens for damage can be a fairly reliable way to win if you lack the efficient Eldrazi.  But at common and uncommon the win conditions that are truly great are Plated Crusher, Eldrazi Devastator, and Bane of Bala Ged.  Two cards that really shine in this deck are Titans Presence and Scour from Existence because you can reliably ramp into Scour and have the top-end to reliably turn Titans Presence into a powerful and efficient removal option.

If you’re only interested in Sealed then this probably isn’t for you.  These are the cards that you see after pick 5 or 6 that should indicate that the archetype is open.   Natural Connection and Lifespring Druid will rarely reach this point but if they do you can be confident that a player to your right isn’t in either Converge or Ramp since these are core to both strategies.  The high quality pay off cards should also indicate this, especially Plated Crusher.

This will be a powerful and very common strategy for both the prerelease and release events for BFZ.  However, if you don’t have the enablers found in the Core Cards section this shouldn’t be pursued as actively.  You generally want between three and five solid direct ramp options in your deck.  You don’t need as many pay off cards you need enablers, so just because you open three Plated Crushers doesn’t mean you should be attempting to run a ramp deck.  It’s much more important you find the enablers and work with whatever large threats you open in your pool as they are much more common than the actual ramp cards.