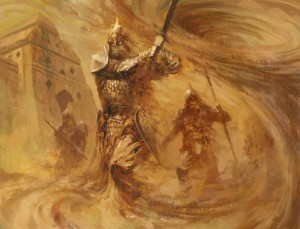 Last weekend we saw the emergence of a new style of deck called the 5-Color Rally by Matthew Tickal. This deck immediately made waves in the Magic Sphere as well as in the Finance community.  Tickal’s deck is featured here on Star City Game’s website:

Today, I would like to take a step back on how as a financier you can adequately prepare for spikes like these from a speculative play, and take advantage of the spike while it’s there.  There are two main areas worth examining with a spike in price.  The first is your position. The other one is executing on the position.

When we examine our position we either have the cards or we don’t.  I would like to reiterate a strategy I touch on in the blog “The Big ‘D’” (http://mtgspeculation.com/2015/06/20/the-big-d/) last month outlining the best entry points, and building your position.  The idea is you try to acquire most cards at a relatively low entry point.  For example, I consider if you can get everything for less than $.50 per card to build your bulk position you are doing okay.  Generally, I shoot to lower that number under $.25 per card, and I typically focus on rares.  That is my first, criteria, the second one is that they are usually standard rares.  I do this because this is what has been working for me so far.

If you aren’t buying the cards ahead of time don’t waste chasing the cards like I previously mentioned.  However, if you do I thank you for generating demand for everyone to move their cards.

We can approach execution in two systematic ways.  The first being, you know have a card that would of cost you more to acquire to play a new deck.  This is an overall savings to you as the financier, and your collection has increased.

The second, is actually outing the card.  Yesterday, we saw Rally the Ancestors go from 36 points to roughly over 100 points.  On top of that the demand was well over 50+ cards.  This provided a great outlet to move your cards.  When I logged in this morning there were no non-foils being asked for and the price currently sits at 119.

Just using Pucatrade we have a little bit of a problem.  My copies of Rally the Ancestor sky rocketed and now the demand isn’t there, what do I do?  I suggest using this as a learning lesson, as I previously did with Mastery of the Unseen.  Mastery of the Unseen had a similar trajectory, and I held out at missed value on my copies.  I had expected the demand to stay there, and eventually it dried up.  You need to move your cards if you aren’t going to when the hype begins, and unfortunately that window isn’t real big.

My suggestion is settling somewhere in the middle to edge out the competition.  Not everyone can sit in front of a Pucatrade screen all day and refresh.  Make up your mind on what you’re trying to achieve with your trade and speculation play, and stick to it.  Don’t get greedy, or the demand will be eaten up by fellow players.

Good luck in Rallying your Wallet to the next level! If you haven’t tried pucatrade heres our referral link:

I strongly recommend using Pucatrade as a tool in your MTG Financier wallet.