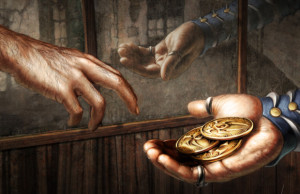 Recently, I have read several articles by people and their ability to pick up magic cards at steep discount in their travels.  Today my plan is to show you how you can deliver big returns by using the power of the dollar in your favor no matter where you are.  You can even take out the flight cost.

One thing Magic Financiers tend to overlook is how opaque the magic market actually is.  Everything is about information, and when it comes to speculation you sure as hell better be informed.  I think being informed is the easy part,

the difficult part is getting that information immediately when trying to execute a trade or a decision regarding your cards.  There are certain standards everyone tends to use.  I’m pretty sure I’ve only traded with one person at my local game shop (lgs) who did not use tcgplayer mid.  Personally I prefer this because it’s more fun to trade.

When it comes to trading what really matters is economies of scale.  According to Wikipedia: In microeconomics, economies of scale are the cost advantages that enterprises obtain due to size, output, or scale of operation, with cost per unit of output generally decreasing with increasing scale as fixed costs are spread out over more units of output.  As an individual we each have our own markets that we participate in.  Some examples would include your LGS, Ebay, PucaTrade.  How do you move your cards and at what cost?  Different markets have a different cost.

So, how does one take advantage of information?  I’m going to show you how to take full advantage of your hard earned US Dollar.  Just like a magic card your dollar is a commodity, and it holds a relative value.  The differences of these items, and in which market can cause for a large spread in pricing.  Think of a magic card as a derivative, its price is floating due to supply and demand.  The same thing happens with your dollar relative to other currencies like the Yen.  This creates arbitrage opportunities.

At the time of writing your one USD is worth 119.63 Yen. The next step is to find Japanese stores who ship overseas and sell online.  The one I use for this example is Hareruyamtg.  Next, you need to compare apples to apples.  In my calculations I take the relative cost in local yen of the same MTG cards in English.  Yes, we could do this for Japanese cards if we wanted. Knowing each of the legs of the calculation what we will come out with is a USD price on an English card.  In my example I use MTGprice.com as my pricing data (I like an index for pricing).

After all my calculations I was able to identify five out of 12 cards that were great opportunities to build in paper value if purchased today.  If executed correctly a real return with a bang for your buck. Those cards were End Hostilities, Clever Impersonator, Hardened Scales, Sarkhan, the Dragonspeaker, and everyone’s favorite Siege Rhino.  Of the five I would probably purchase Clever Impersonator, Sarkhan, the Dragonspeaker, and Siege Rhino if I was to execute the trade today because they had the best margin.

What about shipping costs you ask?  I even calculated all of those as well.  Surprisingly at a per card basis it’s really not that expensive.  Again doing all the calculations and conversions I came out at an added cost of $.15 USD at the high end and obviously going back to the economy of scale $.05 per card.

There is definitely arbitrage opportunity here for a trader to create a lot of value for themselves.  Yes, arbitrage is a guaranteed return, it would all come down to your execution.  Do you have the economies of scale to do the transaction, and do you have enough outlets to move your product?  Only you can answer that question for yourself.

Hopefully you have enjoyed my article, please feel free to contact me with questions and feel free to provide comments.

A very important tool is the ability to set good goals.  Fundamentally, setting goals helps adhere to a certain strategy or theory.  For instance, there has been speculation that of all the tribes in the current Khans block Sultai will be have the highest ceiling when future blocks are taken into consideration.  This would be cause to buy up cards or develop a deck around those colors in preparation for future releases.  This is an example of a speculative play.

Now what does the above speculation have to do with goals? Well first and foremost goals help to establish a benchmark upon which progress can track success or failure.  In the case of the Sultai Speculation it is believed that Sultai cards are currently undervalued relative to the other tribes.  This would be tested by developing a price sheet for the different tribes to value their speculation as the future blocks are released, with the goal to yield the highest value of return.  Ultimately all goals represent a metric which in my opinion is the single most important part of a goal.  Once a goal is established it will also help provide focus, and feedback for speculation

Something often overlooked when it comes to Magic in general is a focus.  Players have decks for everything! I mean most players have a Commander, Modern, and Standard deck.  That is three different areas a player needs to split their focus, and understand the different interactions and card mechanics.  This involves a lot of play time and research into the history of Magic.  This lends itself to a much unfocused player, and possibly weakening gameplay.  Would it best to be a generalist and win some or be specialized and win more?  I’m not saying that the above is bad, and many players have been around with the game for a long time.  It’s all about the play style, and the more that is taken could potential reduce and inhibit a player.

With the focus around the Sultai clan as a slice of Khans it is possible to develop a greater understanding and positioning relative to other players in the Khans block.  Rewards could be either financial or increased skill of in-depth card mechanics.  I highly recommend writing down your goal and what your focus is on.

Writing a goal down also creates a channel for reflective feedback.  Feedback can be measured qualitatively or quantitatively.  The closer to real time the more it will help navigate the current atmosphere by adjustment or staying true to the course.

Reflecting on the Sultai example here are some outlined feedback questions:

Each item above can be measured.  First and foremost is timeline.  Timeline helps holding/buying/game play style through the releases of Fate Reforged and Dragons of Tarkir. A timeline also enhances goals by providing a life cycle and stages to mark their success.  It’s very possible that Sultai really sucks during this time frame, but with a timeline it helps improve future decision making. Sultai may also be a very profitable clan to play in this block.  Even though everything is hindsight there is something measurable, and analysis can be performed against the goal.

Focus will enable you to hone your skills and potentially become an expert at a local game shop or in the greater magic community.  Analysis can be performed on trades, and can be catered to varying play styles. Is now a good time to buy or trade Sultai cards like Sidisi, Brood Tyrant? Who knows, but at the very least, there is focus, and research that has been a part of the trade decision.  Even thoughtful hints, tips, or tricks.  Another thing impacted will be a further understanding of the Sultai card mechanics.  Does Sidisi, Brood Tyrant create a zombie token for each creature milled? Or is it per trigger no matter how many creatures? (Per trigger) These overlooked mechanics may help put a twist on value and on game play that has yet to be recognized creating an edge in a market.

Lastly, how can a goal be valued?  One of the easiest values will be financial.  Sidisi, Brood Tyrant purchased at today’s price of $3, and then pops back to eight dollars with Fate Reforged. How many copies were purchased and sold for a financial gain of $5?  An often overlooked value is the knowledge gained on Sultai and gaming mechanics.  Qualitative knowledge should increase about the game interactions and the Sultai clan. This could *possibly* provide an edge for the next year with Khans still in rotation.  Maybe, the Sultai clan deck is pummeling all the other decks at the tournaments and allowing for financial capitalization.

At the end of the day no matter the timeline, feedback, and valuation there are many lines of speculation that can be identified and turned into goals.  Ultimately it will improve game play and possibly lead to some financial gains.