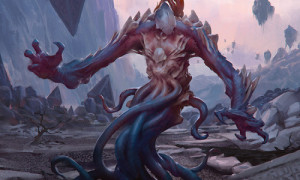 For those of you who have somehow missed the bus Battle for Zendikar’s Pre-Release, it was last weekend, and it was one hell of a time.  There has been a lot of hate in the MTGFinance community going on, and claims like the only value will be the Expeditions.  Today I would like to talk about a totally different value I found, and the BFZ Pre-Releases I attended over the weekend.

After playing Magic for some time there are a lot of things we forget, and of which I was reacquainted with this past weekend.   First, we trekked out Saturday to play at a different shop.  There are three things I want to point out of which I had forgotten about: One, not all shops are created equal.  Two, not all decks are created equal.   Keep these two things in mind.  Thirdly, cracking packs is always fun.  That last one isn’t as relevant.

It’s always fun going to a new game shop.  It was a nice change from the typical MTG shop I go to. I opened a ton of value you can see here on Twitter.

Now the thing I love most about the game is how things can be very unpredictable.  Honestly, I thought my deck was going to be terrible.  I thought there was no way in hell, my Red/Black non-ramp Eldrazi 5+ 6 drops deck was going to cut it.  I had pretty much chalked the day up to: “Awesome I opened an Expedition, my blessings were counted for the day.  Time to go home.” Kind of a day.  I was proven wrong, and even more so realized how fun it is to play “BIG ASS CREATURES”.

Once, my Eldrazi’s were up in place they fed themselves. I also have a love hate relationship with Bane of Bala Ged.  Bane is a lovely sight when you aren’t defending against him.  Another card that really worked well for me was Conduit of Ruin.  The conclusion I came to with Eldrazis, is if my opponent didn’t have any to match the might of my own, or the removal…they were toast!  I also, never ran my Ulamog, the Ceaseless Hunger.  I probably could have actually cast him every game too. As you can see this turned out to somehow be a killer deck.

The thing is I don’t actually know if the deck was really that good.  I mean my friend, and I met in the Finals, split the packs and went home.  However, it left something lingering with me.  Did I actually build a good deck, or was it the level of players at the shop?  I think I may have to go back a few times to find this out, but I do know that the shop doesn’t host weekly either.  It was also a nice experience being able to help players learn about the new mechanics.  I was asked what is exile anyway? In short I responded with, “Exile works like a second graveyard.”  If anyone has a better explanation I would love to see it in comments. 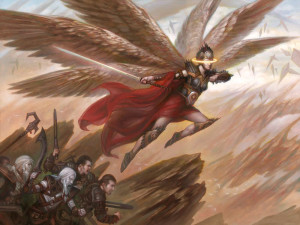 I feel like everyone has that game shop that they call home, at least the one they go to the most.  Anyway Sunday went way better than planned on the cracked packs. I didn’t expect to get anything good because Saturday had gone so well.  However, I was wrong.  I pulled Ob Nixilis Reignited as my promo, and my buddy pulled Ulamog as his.

Today was not my decks day though.  I ran a red/white ally deck. Surprisingly, I had a lot of cards for it. Two Lantern Scouts, Dragonmaster Outcast, Radiant Flames, Angelic Captain, and a ton of Allys.  I also had a Retreat to Emeria, and loved hitting two for ones with my evolving wilds and cracking them during combat to spike all my troops.  A lot of players did not see this coming.  So, keep it a secret between us.  Alas, my day ended going 1-1-2, and my buddies did go as well either.

Again, I put myself into a similar question.  Was my deck really that bad or were there just better players here?  Typically this game shop I consider to have decent players, which play a lot and know the mechanics of the game.  They also invest a lot of their time outside of the shops learning as well as prepping for things like releases.

Overall, thank you Wizards for a fun new Block.  The Pre-Release was a great gaming experience, and nice change in format.  I also, need to remember that even if you think your deck is going to be amazing or be terrible, you can’t fully anticipate the outcome of the day.  With that we may never know if I build good decks, or was it the fact that everyone showed up with their “A” game.  Enjoy the new Battle for Zendikar block, and if you didn’t catch the Pre-Release at least try and get out for the Release.  I believe you will get amazing value with your time, even if the cards don’t end up being worth much.